These Lord Shiva temples were constructed 4,000 years ago by ancient architects in an era of no satellite technology without any GPS or gizmos to measure exact latitude and longitude. The architects were also separated by hundreds of kilometer, yet these temples were accurately established at 79° longitudes. The distance between Kedarnath and Rameswaram is of 2383 kilometre.

Connecting the above dots on the map and one gets a straight line which is called ‘SHIVA SHAKTI AKSH Rekha’ – beginging at Kedarnath and ending at Rameswaram.  Kedarnath, Kaleshwaram, Kalahasti, Akhaseshwar, Chidambaram and finally the Rameswaram temples have been built in the geographical straight line of or nearer to that of 79° E 41 ‘54 “Longitude. Further, it is believed that many more temples fall in this straight line from Kedarnath to Rameswaram.   These temples were built using yogic science (calculations).

Five of the eight Lord Shiva temples have Shiva Linga signifying element of the Pancha Bhoota (elements of nature): Earth, Water, Fire, Air and Sky. These are the elements on which the whole universe is built. The temples that represent Pancha Bhoota or Panch Tatwa which lie on the straight line are:

Many historians and archaeologists are researching to find out the secret behind such magnificent engineering.

The very meaning of the name ‘Kedarnath’ means lord of the field and is a height of 3583m, located in the Garhwal Himalayan range near the river Mandakini. The temple has an incredible spiritual might. According to the legend, the belief is that Pandavas built this temple to ask forgiveness from Lord Shiva.

This temple has special significance due to the two Shiva Lingas placed on a single pedestal or the Panavattam, they have been named Lord Shiva and Lord Yama and are collectively called the Kaleshwara and Mukteswara Swamy.

The Ramanathaswamy temple, located in the Rameswaram district in Tamil Nadu, has a magnificent, imposing structure, with long corridors, aesthetic curved pillars, a towering 38-metre ‘Gopuram’ adorns the temple.  According to legends, Lord Ram the seventh Avatar of Vishnu prayed to Lord Shiva for getting rid of the sin of killing Ravana.  Lord Hanuman was instructed to bring a lingam from Himalayas but due to delay Maa Sita made a small lingam using the sand from the seashore. It is believed that this is the same lingam placed in the sanctum of this temple.

Following are the temples representing Pancha Bhoota or Panch Tatwa representing the wonderful mating of Vastu-Vigyan-Veda.

The Srikalahasti Temple considered as one of the ‘Pancha Bhoota Stalam’  where the presiding deity is worshipped as Air or Vaayu Lingam, this temple is infused with an abundance of divine and vibrant energy. The Shiva Lingam is made up with white stone and is shaped like an elephant’s trunk. The main gopuram of the Srikalahasti Temple is approximately one hundred and twenty feet high. The mandap inside the temple complex has a hundred intricately carved pillars and there is also a nine feet tall rock-cut shrine dedicated to Lord Ganesha.

Ekambareswarar Temple represents the element Earth where Shiva is worshipped as Ekambareswarar. The temple is thousands of years old with the current structure being a reconstructed one, around 600 AD and has a 172 feet Raja Gopuram which is a marvelous piece of architecture.  According to legend, the lingam here was made and worshipped by Goddess Parvati herself and that we can still see a mark on the Lingam which holds this legend true. Legend states that once Lord Shiva’s eyes were covered by Goddess Parvati and the world suddenly filled with darkness. Lord Shiva asked Parvati to do penance to free her from wrong karma and she was born on earth as Kamakshi and started her penance. She constructed a Shiva linga out of sand and worshipped Lord Shiva in the form of Prithvi Lingam [Lingam made of earth].

Lord Shiva in order to test her devotion caused a flood where Kamakshi was busy worshipping him. Kamakshi on realizing that the flood may wash off the Prithvi Lingam, embraces the lingam. Lord Shiva who started melting due to her devotion materialized in human form and married Kamakshi. Also this is when Kamakshi accidently left some marks on the lingam as a result of her bangles and kuchas hitting the sand made lingam, these can be seen even today.

‘Aayiram Kaal Mandapam’ or the 1000 pillared hall, 1008 Shiv Lingams adorn the inner walls of the temple and ten musical pillars at the inner corridor of the temple are other significant features of the temple. The brilliance of the ancient architects in constructing the temple is that the sun rays falls directly on the Shiva linga every 19, 20 and 21 of the Panguni month (March-April).

The significance of Jambukeswarar Temple located in Tiruchirapalli, Tamil Nadu. The presiding deity is the Appu Lingam — Jambukeswara, representing the element water. The sanctum of Jambukeswarar is always abundant in water where the deity is depicted sitting under a jambu tree which grows over a small stream. The deity is covered with water during the rainy season.

According to legend, as per Lord Shiva’s wish Parvati in the form of Akilandeswari found Jambu forest (Thiruvanaikoil) to conduct her penance. Here, she commenced her worship by making a lingam out of water of river Cauvery under the Venn Naaval tree (the Venn Naaval tree on top of the saint Jambu). Therefore, the lingam is known as Appu Lingam (Water Lingam).  Legends also states, that as an elephant worshipped Shiva here, there the place is also known as Thiru Aanai Kaa (thiru means holy, aanai is elephant, kaa (kaadu) means forest) which later became ‘Thiruaanaikaa’, ‘Thiruvanaikaval’ and ‘Thiruvanaikoil’.

Lord Shiva is represented as a column of fire called as Agni Lingam. This temple is located in the town of Thiruvannamalai, in Tamil Nadu, India.  Mythologically, when there was a clash between Lord Brahma and Lord Vishnu regarding their supremacy, they surrendered to Lord Shiva. He challenged them to find his head or his feet as a test and they both accepted that whoever was successful would be deemed superior. Brahma moved upward and Vishnu went downwards. After a long time, Vishnu could not find the feet of Shiva and gave up, coming back and accepting that he was not superior. But Brahma appeared with a flower, claiming that he had taken it from the crown of Lord Shiva. Lord Shiva exposed the deception, and laid a curse that Brahma. Here, Lord Shiva is worshipped in the form of a column of huge fire which is an endless phenomenon.

Nataraja Temple is also known as the Chidambaram Nataraja temple or Thilliai Nataraja temple – as this temple signifies Shiva’s dancing form – the Nataraja. The word Chidambaram may be derived from chit, meaning “consciousness”, and ambaram, meaning “sky” (from aakasam or aakayam); it refers to the chidaakasam, the sky of consciousness, which is the ultimate aim one should attain according to all the Vedas and scriptures. Another theory is that it is derived from chit + ambalam. Ambalam means a “stage” for performing arts. The chidakasam is the state of supreme bliss or aananda and Lord Natarajar is the symbolic representation of the supreme bliss or aananda natanam. Yet another theory is that it is derived from the word chitrambalam, from chithu meaning “play or dances of God” and ambalam meaning “stage” 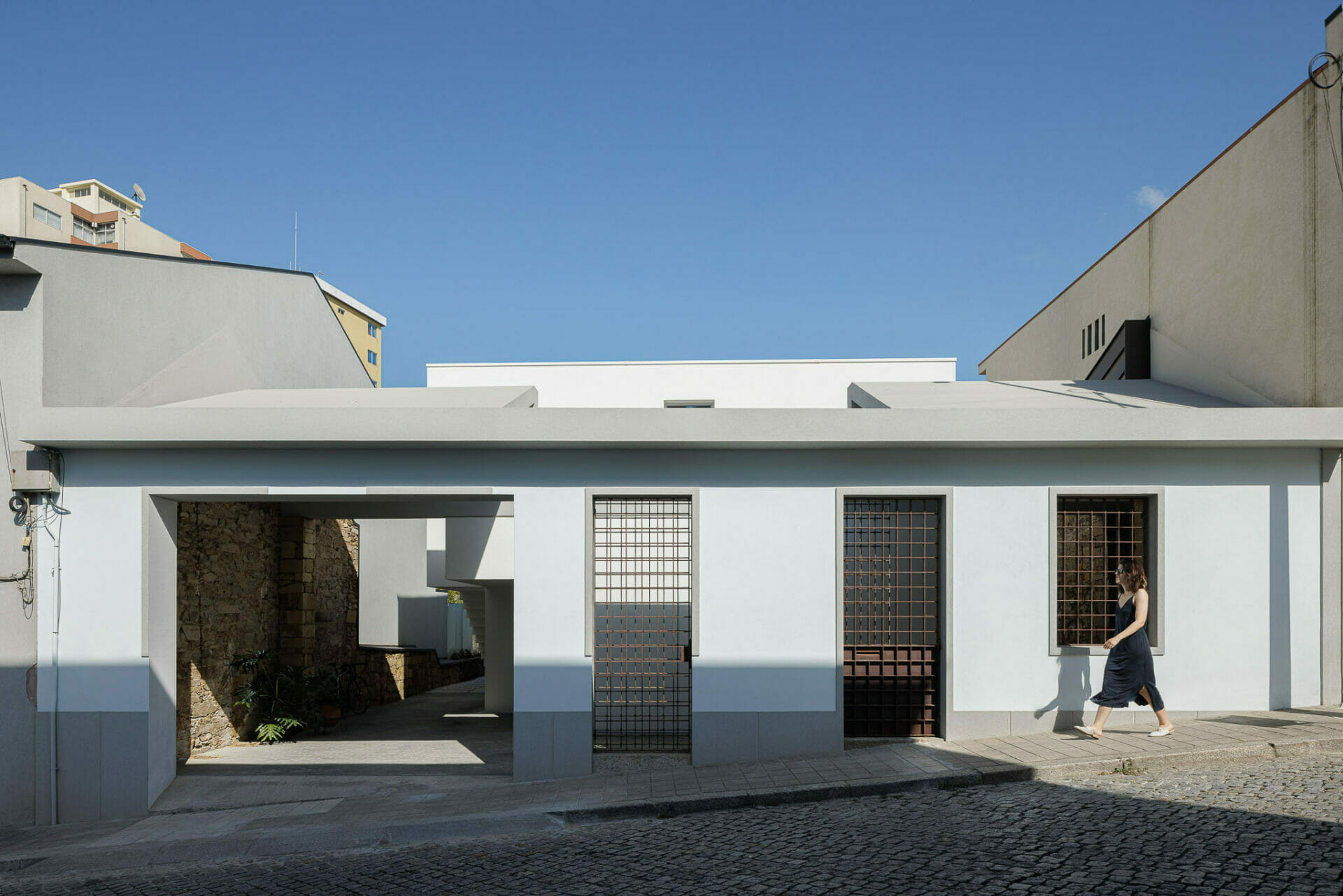 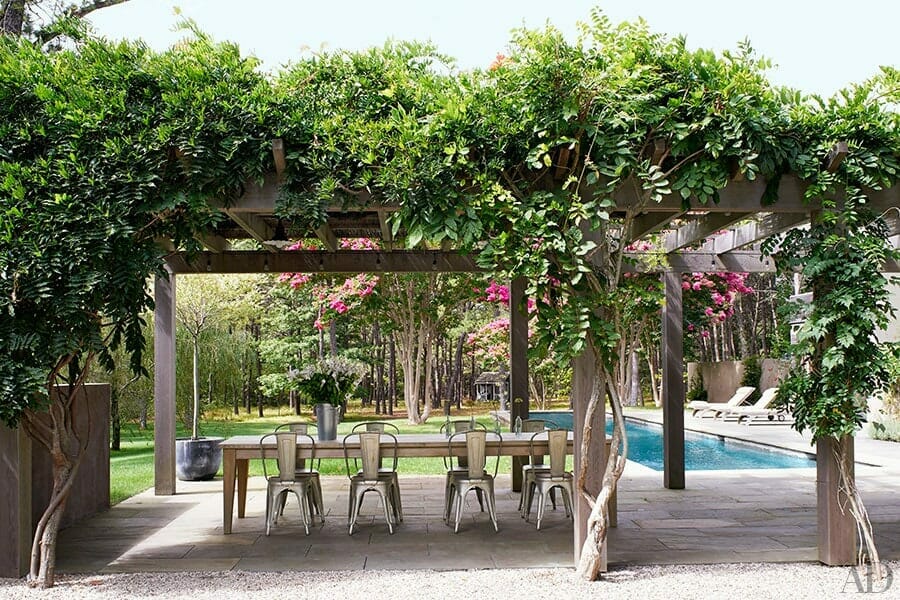 Escape by Creatomy Unveils a Stunning Collection of Décor Accessories

Pemã Studio created a unique, modern architecture design in the urban residential area of Santo Tirso. The plot was enclosed by neighbors, and the pre-existing

Escape by Creatomy Unveils a Stunning Collection of Décor Accessories

Escape by Creatomy, a renowned brand in handcrafted products, has recently launched a stunning collection of décor accessories inspired by fauna. These cool forms are

With the growing popularity of metaverse, another venture in the field is the creation of virtual buildings for metaverse communities. Many designers have created several

Celebrated filmmaker Muzaffar Ali, who is known for his award-winning and critically acclaimed films like “Gaman” (1978), “Umrao Jaan” (1981), and “Anjuman” (1986), will showcase 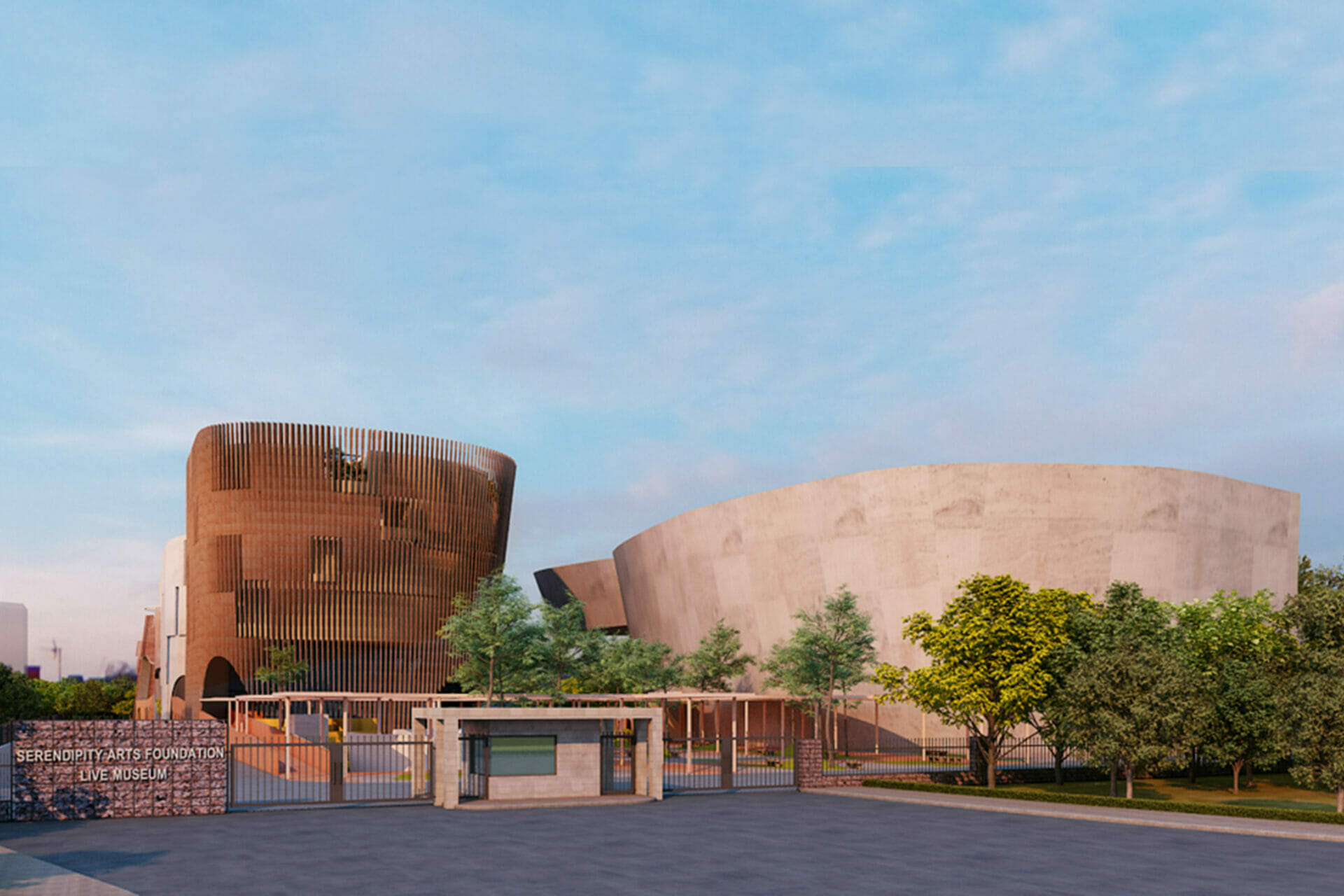 The Serendipity Arts Foundation has announced that the design for their new cultural center in Delhi, called “The Brij”, will be created by the renowned 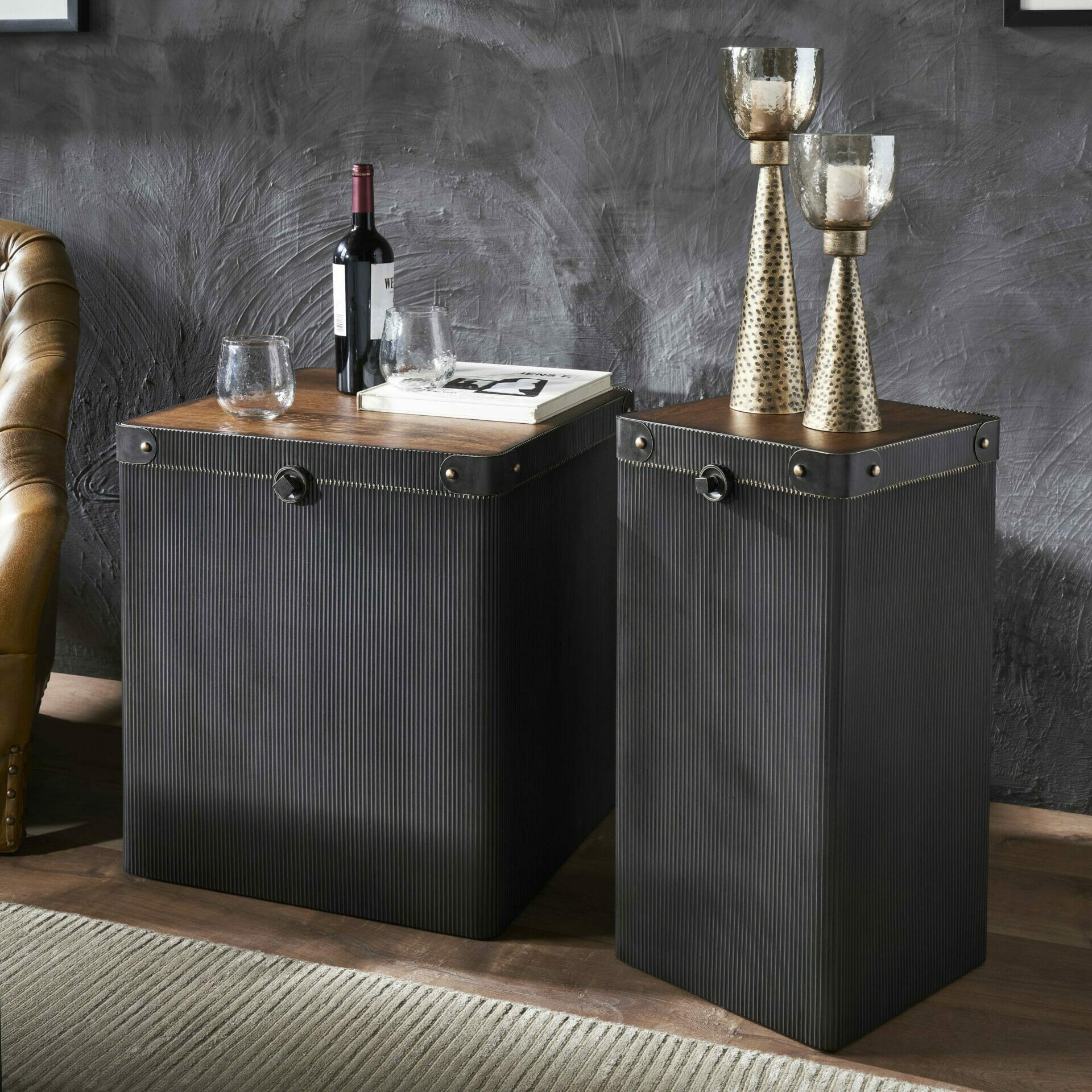 Mastered in lighting, furniture, barware and home accents, this New Delhi-based brand Renovation Factory has mastered the art of home décor while combining functionality and 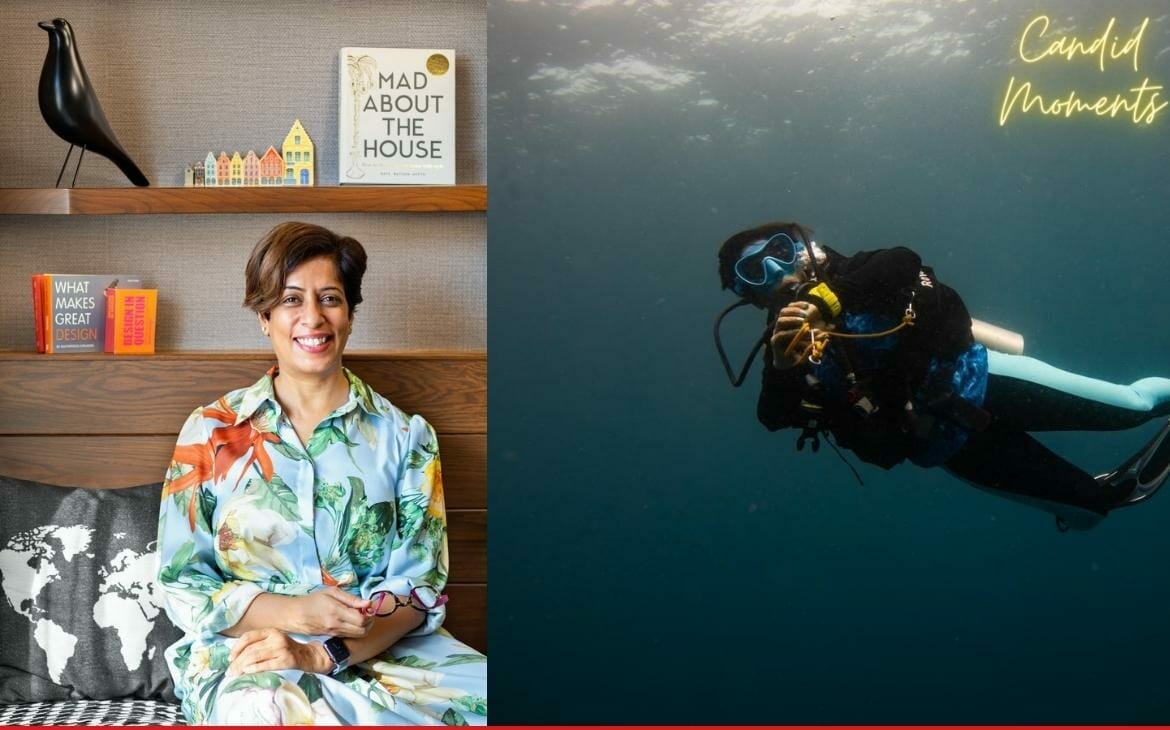 Q1.Why did you choose to get into interior design? My father was a fighter pilot with the Indian Air Force, which had us frequently moving

Meet Ar. meenakshi umesh, the founder and head of multi-disciplinary practice mudhive, based in Dharmapuri district, Tamil Nadu. She works on different ideas and concepts

Pemã Studio created a unique, modern architecture design in the urban residential area of Santo Tirso. The plot was enclosed by neighbors, and the pre-existing 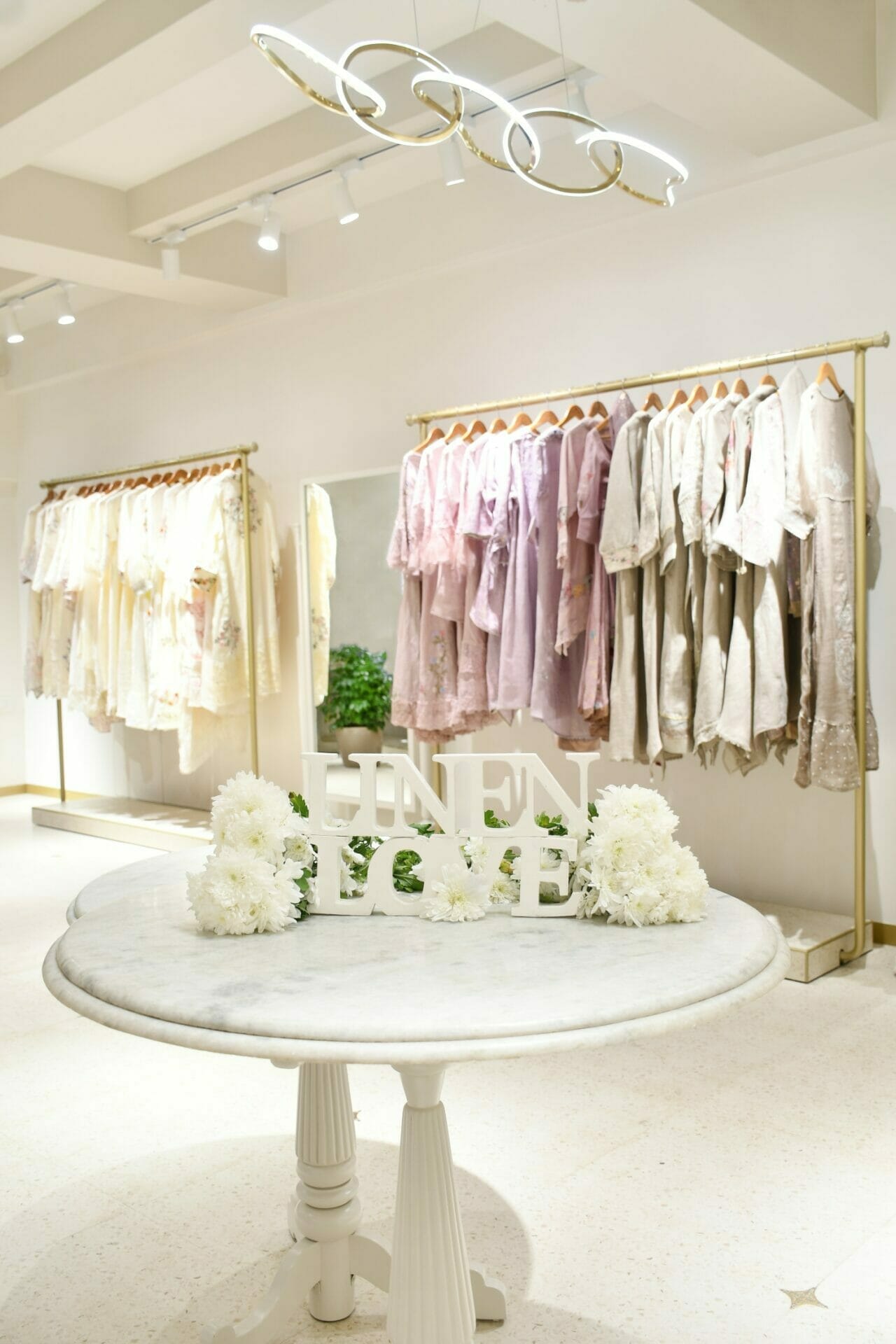 Kaveri Lalchand’s new store in Kala Ghoda, Mumbai sparks some muted aesthetics that will remind you of a typical Parisian boutique. The gold shimmer lining flows in most of the parts of the store.

Designed by LTDF, this office in Gurugram is a youthful affair of design and tech

LTDF’s newly designed office space gives us an ephemeral experience of luxury that has all subtle tones and textures encased in a single palette. It brings you a step closer to experiencing your space in a vivid manner through the designer’s lens.

Morphogenesis designs a community project for brand forest essentials on the banks of river Ganga that focuses on sustainability. The building not only sustains on its own but also creates energy that can be used for other purposes.